In August 2016, I once again boarded a ship in Malta to travel to Jabal Ali.  I had recorded the previous occasion with giddy excitement, all things seeming new and unfamiliar.  Perhaps the familiarity of the trip, or the fact that I was writing my book proposals (rather than focusing on my diary entries and on reading and reflection) made 2016’s entries quite anaemic in comparison with the previous time. And perhaps that is why it has taken me so long to post these. For more reflexive, more literary deliberations on the nature of containership travel, perhaps it is best to return to my entries from 2015 (the first is here:https://thegamming.org/2015/02/03/wake-up-your-saints/) . They fall under Travels category!

Having sailed from Marsaxlokk

It is strange to be on a cargo ship once again. The differences come to the fore at every turn.

First and foremost, I am far more familiar with the workings of the ship, its layout, and even one of the engineers –who had been on Corte Real in January 2015. I am a bit more jaded, a bit less overwhelmed by the sublime vastness of this whole thing, a lot more comfortable wandering about, and asking for things. It really also helps that I am the only passenger, and this time, unlike last time, the only woman onboard. I am not sure how this will affect everything – but thus far everyone has been lovely, although the messman, Lysandro is seating me on my own and beyond a barrier. I feel a bit like I am in a harem. The officers chat with me though (especially if there are no others around) and are friendly and warm. 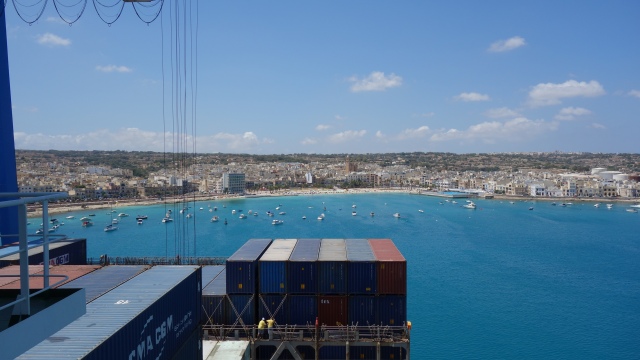 But there are also other stuff that will distinguish Callisto from Corte Real. There are so many more port visits than last time: Damietta, then Beirut, then Mersin, then through Suez to Jidda, then Jabal Ali. Navigating past Lebanon and Cyprus should be a treat.

The second thing that is different probably has something to do with this abundance of port visits: the ship is relatively empty of boxes. My window is not obscured by containers. I can see the sea; and light pours into my cabin, which is wonderful. I wonder how long this will last though. The officers were telling me that most of the containers are empty in any case, and they thought that the containers we would pick up in the ports on the way would similarly be empty. It is a bit strange to see all these container racks aboard the ship which are devoid of boxes, and to be able to see the massive (33 tonnes!) cover of the under-deck holds. 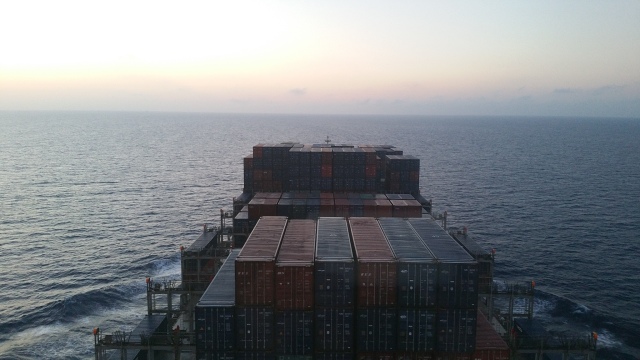 What is interesting about this relative paucity of boxes is the way they are loaded on deck. There are entire rows that are completely free of boxes, save for the edges. Two containers on top of each other on the very furthest margin of the decks on both port and starboard. Is this for aesthetics’ sake or balance? Does the particular needs of loading ballast dictate the placement of the boxes? The loading of the boxes in each row is fascinating: some are loaded six levels high and then entirely empty rows. On some rows, boxes are bunched towards the centre (with a couple of boxes loaded at the edges again) and for a handful of rows, boxes go all the way across. I am not sure that the box storage spaces in the holds are actually full either. The rows in the aft are all completely full however. Will have to ask the captain about this.

The other major difference is that unlike last time, the residence decks and the wheelhouse are all located atop the engine room. Although I am far above, I can still feel the thrum of the engine, the ship’s beating heart, in my cabin in a way I couldn’t before. This is quite exciting actually.

The other differences are minor: the gym is huge and well appointed. The layout of the wheelhouse differs from Corte Real. There are only 27 officers and crew on board not 35 like last time.

Danilo – one of the crew – actually likes the new Filipino president because he is cleaning up Manila. Lysandro, the messman, used to work on a cruiseship and finds both workplaces as difficult as one another. There are two Chinese engineering trainees on board. And like last time, there is one Filipino officer, but he is a third mate this time, not second mate, like last time. There are also fewer officers altogether. One second mate (not two) and two third mates. And far fewer cadets.

This entry was posted in 2016 Trip, Travels. Bookmark the permalink.