Marsaxlokk-Jabal Ali:  At last at sea

Occasionally in the night, the ship bumps against the berth and that is when one remembers that one is not on solid ground. I can’t wait for our ship to take off tomorrow, so that I can actually feel the motion, and especially at night. The loading went on all night long and continues to go on.  The cranes had started in the middle of the ship and have now moved to the extremities of the ship and continued with their metallic ballet.  We are still delayed.  Supposed to leave at 8.00 and then 10.00 and then noon; and now I hear 2 or 3. 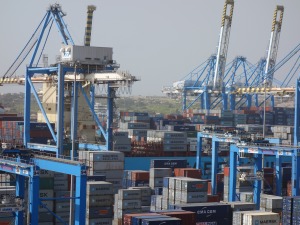 In the port, I can see three smaller CMA CGM ships and a massive Maersk one, which seems to be unloading. At least for now.  This being a transhipment port, the Maersk ship has probably brought in goods from northern Europe which it unloads and then it shall load containers perhaps from southern Europe or North Africa. Braudel’s argument –made already in 1949- that one cannot really study the Mediterranean severed from Northern Europe or the Atlantic regions is exactly accurate.

The port is a hive of movement.  Truck drivers toing and froing between yellow lines; loading cranes with their nino-nino-nino horns moving across the banks of stacked and stored containers and loading them on the flat beds of the trucks.  And now the three massive cranes working on our ship.  I wonder how our lateness affects the schedule of the port and of the ship.  Who pays for this? Who bears the costs?  What do the longshoremen do when the ship is late on arrival and late to depart? 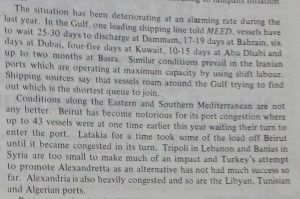 When one reads about the late 1970s and the  which led to ships queuing up outside Middle Eastern ports for weeks, you wonder about the calculus of port capacity.  About fines and schedules.  About lives of the ordinary seafarers spent waiting.  And the lives of dockers in a whirl of work at unanticipated and urgent moments.  How do the spatial arrangements work in the ports, where there surely is a hierarchy of labour – with those hyper-skilled puzzle-workers who operate cranes in their lonely high aeries.  Do they dream of flight?  Do their hands move in their sleep as if they are manipulating the levers of the cranes, metal beasts suspended from their cranes above high plateaus of colourful metal? 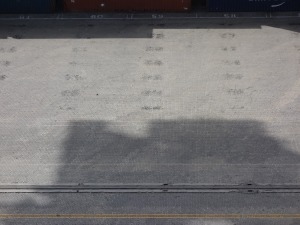 The strange mixture of music that comes from the port is extraordinary.  Notes being played –by the cranes?  Someone’s phone? The nino-nino of smaller cranes.  The low metallic rattle of trucks moving through the concrete space.  The port’s surface here is bricked.  Why not the ubiquitous concrete? The bricks bear the memory of the containers they carried… Marks left in regular patterns.

The materiality of the port-work is a good antidote to the abstractness of so much that is written about the transformations in capitalism. There are still solid goods being moved here – and Marx’s “annihilation of space by time” begs the question: how will time be abolished?  Certainly, the labour goes faster and faster and the relentless drive to automation removes the bodies that can slow the work down.  But there are still containers to be moved, and the goods to be loaded and all that takes time.  And this interminable wait for departure makes me physically aware of time. But of course Allan Sekula got there a long time ago:

Large-scale material flows remain intractable. Acceleration is not absolute: the hydrodynamics of large-capacity hulls and the power output of diesel engines set a limit to the speed of cargo ships not far beyond that of the first quarter of this [20th] century. It still takes about eight days to cross the Atlantic and about twelve to cross the Pacific.

“The passage had begun, and the ship, a fragment detached from the earth, went on lonely and swift like a small planet. Round her the abysses of sky and sea met in an unattainable frontier. A great circular solitude moved with her, ever changing and ever the same, always monotonous and always imposing.”

Joseph Conrad in his unnameable novel

We are now at sea, with the port devoured by the haze at the horizon, and I, liberated from internet.  I can feel the motion of the ship when I am seated or when my body leans against the bones of the ship.  You can feel the resistance of the water as the prow cuts across the grain of the sea.  But the sense of movement is pleasant not disorientating and when standing, my body seems to adjust to it.  Seated, it feels like being swung in a hammock.  From where I sit, I can see that the clothes I have hung to dry are swaying a little, and the pull-and-tug, draw-and-push feel of motion at sea saturates all objects.  I can’t begin to imagine how it must have been crossing through the Channel or Bay of Biscay in a storm, when apparently the containers screeched and wailed and the ship swung from side to side.  I don’t sense seasickness coming on.  Perhaps because I have spent the last hour leaning against the bridge and stare at the sea, my body, my inner ear, my bones, are getting used to the motion. In addition to the movement, there are new sounds – not just the imperceptible thrum of the engine, too low and too bass to be heard, but felt nevertheless in one’s joints, but also smaller metallic sounds, as the ship’s metallic flesh adjusts to the movement of the sea and as the containers shift imperceptibly atop one another. 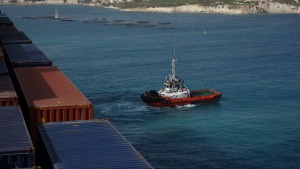 To depart from the port, little orange tugboats  had to pull us away from the berth; and two pilots on the two sides of the bridge guided us away from the concrete port at an angle. I am not entirely sure how they got off the ship. I didn’t see a boat close by. This being pulled by tugboats is a kind of majestic and ridiculous movement simultaneously, such bulk being pulled away by two little boats with their powerful engines, being guided through the angular channels.  But once we are in open sea, the ship’s engines are revved up – and it feels incredibly powerful and incredibly silent.

Now that we are at sea, doors are not to be locked and our deck becomes a much more communal space, with a 15.30 coffee in our common room –with good coffee thankfully. The wind is strong outside and it is hard to believe that this behemoth can move across the surface of the water at such speed.  I am anticipating sleep tonight – with the motion of the ship transmitted through the muscles of the ship, and through me.

It is a shame that on none of the decks, we can actually circumnavigate the ship [I later found this to be untrue].  Our space is really the tower underneath the bridge, 50 meters wide at most and open to exploration more vertically than horizontally.  From what I understand, there is no way to go to the bow of the ship.  But I shall ask. It would be rather amazing to do so if at all possible.