Last week, huge protests took place in Brussels, with the trade unions reporting some 130,000-150,000 people showing up; and major clashes with the police.  The protests in fact have been going on for some time now.  And in the April protests, “hundreds of marchers adorned in the orange bibs of the BTB-ABVV docker’s union from Antwerp ripped up paving stones to throw at riot police, who responded with blasts from two water cannons.”

The protests are about pressures from the European Union to undermine protections for workers’ rights.  As one report explains

The Belgian dockers’ main grievance is a 40-year-old “Law Major” that grants social advantages, and protects them from social dumping. The country’s Flemish-speaking Liberals want to reform it, arguing that it harms the port’s competitiveness.

On 25 March, the European Commission sent a formal notice to Belgium asking for changes to the law – which protects 8000 workers – to be made within two months.

At the 6 November protests, Al Jazeera reports that “Workers and staff at steel firms, the ports of Antwerp and Zeebrugge, the post office and in education were also planning to stage a work slowdown.” And there is going to be a strike on 24 November.

This absolutely fantastic piece in Italian sheds some light on the roots of the proceedings. Its author, Giorgio Gräppi, works on globalisation and migration issues and has some very interesting reflections on the causes of the strike (I don’t read Italian, but Google Translate seems to butcher the language far less than it does other languages).  I just want to point to some of these reflections that are definitely worth thinking about:

First, is the “blue banana.”  As Gräppi explains, in 1989 a new geoeconomic model of development emerged which placed the focus of European industrial development in the zone shaped like a blue banana: 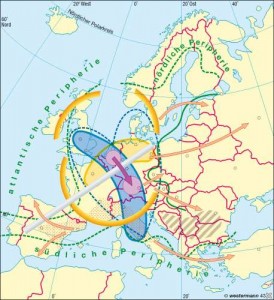 The prediction/plan is now a reality with a supply chain trade  magazine reporting that “‘Blue Banana’ leads the way in European logistics.”  The top European ports (Rotterdam at 11; Hamburg at 15; Antwerp at 16; Bremer at 25) are all within this powerhouse economic industrial zone.  The same trade magazine article writes,

“For instance, a population of 143 million can be reached by lorry within nine hours from Antwerp. This increases to 190 million people for Frankfurt, the city with the largest population catchment in our analysis,” Barnekow said.

Liege in Belgium and Lille in northern France were cited as cities offering a particularly good compromise between market access and reduced costs. The report also said northern Italy offered good potential for distribution activities, as freight traffic through northern Adriatic ports is expected to increase.

Europe has a larger population and a higher combined Gross Domestic Product (GDP) than the U.S., yet it has 4.5 times less Class-A logistics space.  In this context, the reconfiguration of the European supply chain and the rise of e-commerce means there is significant development potential for modern, efficient distribution facilities across the region. The questions facing developers, owners, managers, and their customers, are: “Where are the most strategic logistics locations in Europe, and why?”

The report then begins to evaluate some 100 European ports and score them “against 13 criteria, which were grouped into four categories; 1) Proximity to Customers and Suppliers, 2) Labor & Government, 3) Real Estate, and 4) Infrastructure.”  Predictably, “labour and government” means that low labour costs and ” low regulation barriers” make ports more palatable.  The report specifically quotes “hourly labor costs (incl. wages & salaries and other costs) ranging from €3.70 and €4.40 in Bulgaria and Romania respectively to €37.20 in Denmark and €38.10 in Sweden. Spain scored highest (5th) for the ‘cost of labor’ driver outside Central & Eastern Europe.”

As Gräppi  writes, Prologis’ “ranking functions as a sort of rating for an industry that responds more and more to the logic of a financial nature.”  What Gräppi argues is that these rankings processes essentially place all the ports in competition with one another and placing downward pressure on wages, demanding further flexibility of labour.  Even more importantly Gräppi  argues that when people claim that the automation of jobs essentially necessitates removal of humans from the process of production (the problem of unemployment), they are ignoring the fact that even the digital instruments and automation technologies have to be manufactured somewhere.  This global scale influences policies at a fundamental level.  As Gräppi  writes,

[the protesting port workers’] main enemy, as well as the policies of the Belgian Government, is the EU’s attempt to liberalize port policy at the continental level, to overcome the current organization on a national scale… [It] is clear that liberalization imposed on a continental scale would pressurise even those ports where today the bargaining power of workers is higher.

Perhaps especially those ports where the bargaining power of workers is higher.  Gräppi’s reflections on these massive changes and what they mean for labour-organising are worth reading at length (even if one has to do so via Google Translate).

But there is another point of interest for me:

As Gräppi explains (and the Prologis report passingly mentions), there is also now some talk of developing “Romania Pan-Regional, an area identified in the triangle between Timisoara, Bucharest and Brasov.”  Incidentally, the emergence of these new logistics mega-hubs (or corridors, gateways, logistic cities, and other varying appellations) is something Deb Cowen wrote about in her brilliant book (which focused specifically on Basra Logistics City (on the site of Camp Bucca) and on the new air-sea hub to be built on Clark Airbase in the Philippines).   The Prologis report says that Romania Pan-Regional “owes its top 10 rank primarily to very good scores on Real Estate and Labor & Government categories.” I wonder of the triangle between Timisoara, Bucharest and Brasov teems with old and disused Soviet air or army bases.    But even more interestingly, what will probably end up accelerating the growth of the logistics industry in Romania is this little news item:

A Pentagon statement said the two sides “finalized an agreement for Romania to support logistics into and out of Afghanistan, including both personnel and cargo movement.” Further details about the terms of the agreement with Romania were not made publicly available.

The United States currently has more than 50,000 troops in Afghanistan, and will need to transfer huge quantities of vehicles and weapons out of the country over the next year to meet the deadline of withdrawing combat forces by the end of 2014. The United States has been paying tens of millions of dollars annually to use the Manas base in Kyrgyzstan [but the US contract with Manas expires in July 2014].

And there is trans-continental scale for you!